Here’s how the release sums up those steps:

Here’s a visual summary of the overall structure: 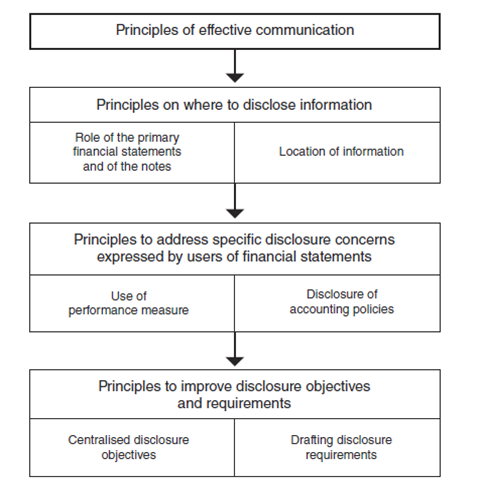 Given that this is some way away from leading to any changes to standards (comments needn’t be submitted until October 2, 2017), many will probably see the paper as something that can be left to specialists. It’s still an interesting read though, for how it tries to bring specificity to aspects of IFRS which are currently quite general; even in its current form, it might sometimes be a useful reference point for decision-making. For example, IAS 1.117 requires disclosing “significant accounting policies” including those “that are relevant to an understanding of the financial statements,” but the few brief accompanying paragraphs leave plenty of room for disagreement about what an issuer has to provide, and in how much detail. The discussion paper proposes that every accounting policy that an entity might theoretically disclose will fall into one of three categories, based on their degree of importance to understanding its financial statements; it attempts to distinguish between the three categories in some detail, and suggests that an entity should disclose policies falling within categories 1 and 2, but not those falling within category 3. Although for my money this might still be too much mandatory disclosure, the paper provides a better basis for discussing the matter than we currently have .

Linked to this is the issue of what information can be provided outside the financial statements and what can be incorporated into it by reference. On the same topic of accounting policies, the paper says: “If Category 2 accounting policies are not disclosed, users of the financial statements who are unfamiliar with IFRS requirements would need to consult IFRS Standards in order to understand the financial statements.” This might not in isolation seem true – for example, such detail could be provided on the issuer’s website, with a web address included within the notes. But the paper suggests elsewhere that such incorporation by reference would only be appropriate when the omitted information “is provided within the entity’s annual report” (IFRS doesn’t currently define that term, but the paper proposes doing so) – among other things, the IASB seems concerned that information provided on a website might be difficult to find or access, or might not remain available for the same length of time as the financial statements. It should be interesting to learn the range of comments on such matters.

Presumably though, the material relating to performance measures, income statement subtotals and the like will be among the most scrutinized. Here’s where the IASB currently stands on that:

The paper seems to suggest that the last of those items might be particularly challenging. For example, it reports that some stakeholders have suggested that “entities can use the term ‘infrequently occurring’ to describe an item or transaction that has occurred more than once within a stated period—for example, within the previous five years—or that is likely to occur in the foreseeable future.” Others have suggested that “re-occurring items that are unusually large” might be disclosed separately. It’s not hard to imagine what a tortuous cookbook might lie at the end of such a road.

Anyway, that’s just a flavour of what you’ll find in the discussion paper, if you choose to read further. And as indicated, the IASB doesn’t mind if you take your time about it…

The opinions expressed are solely those of the author